I support infrastructure including new roads, public transport (e.g. a new train station in Altona North), schools (a P-12 for Altona!), etc., and I really wanted to support the so-called Westgate Tunnel (formerly called the Western Distributor) but now that we know the real impacts of what is being proposed I have serious concerns about the project.  It is obvious the Westgate Tunnel (which is not an alternative to the Westgate Bridge) is designed to appease the concerns of Maribyrnong residents without any regard for residents in Altona North, Brooklyn and Spotswood, and all the many people that visit, work, go to school and drive through those areas.

The concerns are all laid out in the EES but basically there are huge air quality and traffic impacts.  HUGE.  The graphic below is an good indication of some of the traffic issues (keep in mind we also need to factor in the additional 7000 residents proposed for the former Dons site on Blackshaws Road): 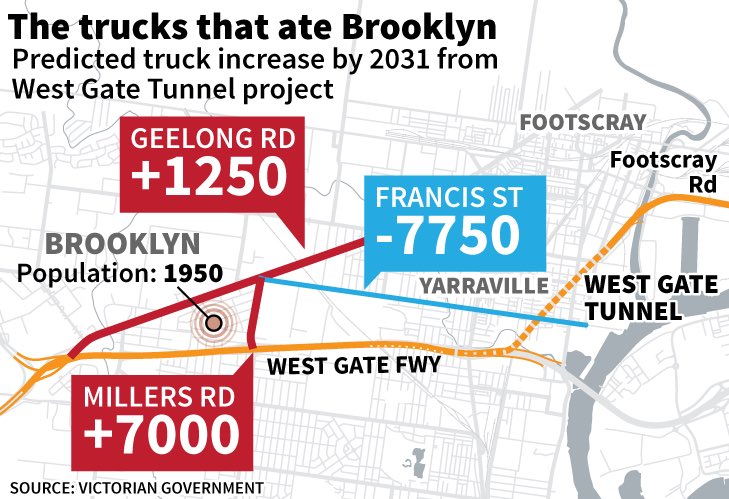 It is incredibly to me that the issues such as amenity, air quality etc that resulted in residents in Maribyrnong being successful in getting this tunnel are being ignored in Hobsons Bay.  We are not getting any truck bans, curfews, etc., as was the case in Maribyrnong.  Also, it’s fair to say the residents in Altona North, Brooklyn and Spotswood could not have envisaged on living near such horrendous impacts when they bought their properties – it’s just not fair.

I encourage residents to get involved and lodge submissions to the state government about the adverse impacts of this project.

There are several wonderful community groups working on this issue too.  If you want to get in touch with them please contact me – tony.briffa@briffa.org 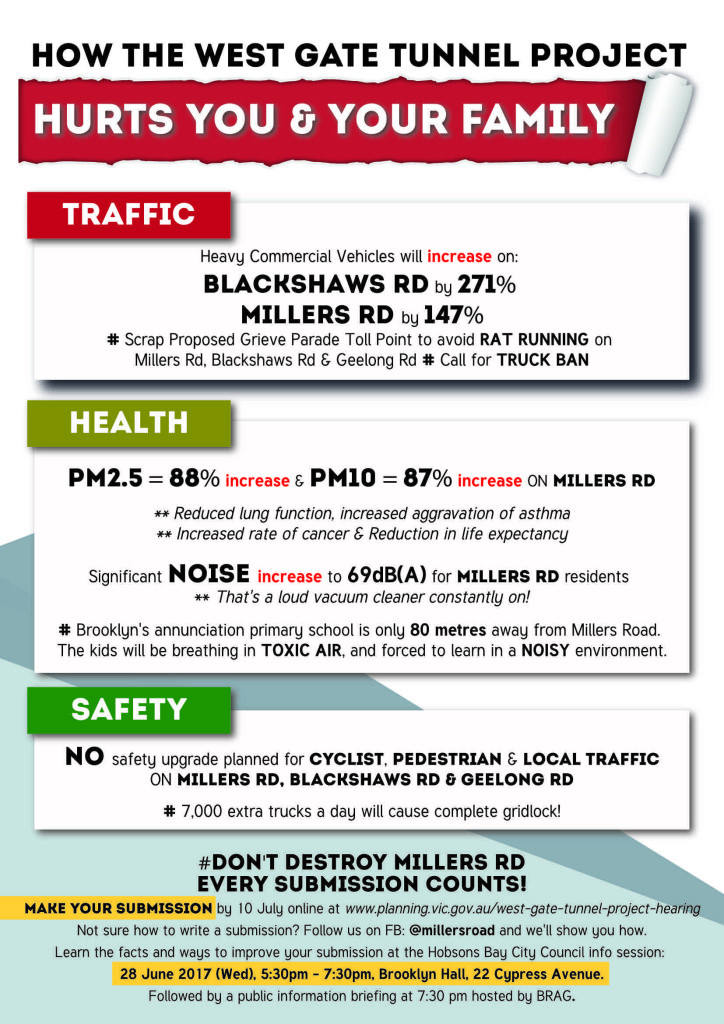 A flyer distributed by the Brooklyn residents’ group

The following are some media articles about this project.

Hobsons Bay council last week voted to help residents campaign against the negative impacts of the West Gate Tunnel project, with one councillor calling it the “Maribyrnong bypass”.

While truck curfews will be implemented in Maribyrnong, Millers Road in Hobsons Bay will see up to 10,300 more trucks a day by 2031 as a result of the project.

The council voted to “conduct a public campaign and a public meeting to encourage, support and assist Hobsons Bay community members and groups to make their own submissions” on the project.

“It is not an alternative to the West Gate,” Cr Tony Briffa said.

“This project, as far as I’m concerned, is the Maribyrnong bypass and that’s certainly what I refer to it as.

“The impact on Millers Road, particularly nearer to Brooklyn, will be quite significant. Then there is also the health impacts.”

It wants a night and weekend curfew in Millers Road, between Kororoit Creek Road and Geelong Road, with trucks travelling to local businesses exempted. Cr Jonathon Marsden said the council did not support the West Gate Tunnel toll road.

“It is not a second river crossing, it is a political fix … We have recommended … the state government purchase the vacant industrial land located between Simcock Avenue and the West Gate Freeway for the purpose of conversion to public open space.”

A petition has started on change.org calling for trucks to be moved to Grieve Parade instead of Millers Road as part of the West Gate Tunnel project.

TRUCK curfews on inner west streets could be written into legislation, but there won’t be extra resources to carry out enforcement, Premier Daniel Andrews says.

A new ring of tolls and road bans will hit thousands of trucks unless they use the new $5.5 billion tunnel connecting the West Gate Freeway to CityLink.

A 10,000 page environmental effect statement has been released showing that all trucks using the West Gate Freeway would face a new toll regardless of whether they use the new tunnel or continue over, or come via, the West Gate Bridge.

And motorists heading to the CBD via the new tunnel in the morning rush hour face the state’s first peak period tolls to try to discourage them from entering certain city streets.

At the same time, truck curfews will be slapped on streets around the Port of Melbourne, sparking criticism transport operators will have to inflate cost of goods to offset new costs.

However, it is unlikely that more resources would be invested by the Andrews Government to carry out enforcement.

Mr Andrews defended the project despite the EES revealing the promised time saving of 20 minutes only applied in a few trips on the new road.

“We can have a debate about a range of time savings or we can just pause for a moment and think about where will we be in 10 years if we don’t build this,” he said

Previously the government have said tolls could be extended 10 to 12 years.

However, Mr Andrews declined to commit to the figure today.

The toll rates are still subject to negotiation between Transurban — which is funding most of the project in return for tolling revenue — and the Andrews Government, but the EES points to two new toll points on the West Gate Freeway at either side of Millers Road and one more at Hyde Rd.

Another toll point is at the city access ramps to Footscray Road, Dynon Road and Wurundjeri Way — which would hit motorists with an extra charge if they get off there during the morning peak.

Modelling on tolling has been done as much as 20 per cent above the 2015 CityLink rate for trucks of about $13.00.

Cars using the tunnel will likely be hit with the same toll as the Bolte Bridge — now $3.

Locals fear without proper monitoring of the truck bans on inner-west roads the streets will still be used as rat-runs, while transport companies are furious it will force them to use the paid highway.

“Transport operators will inevitably pass on the cost of higher tolls throughout the supply chain, so ultimately it is consumers that will foot the bill through higher prices for goods and services,’’Mr Anderson said.

But the government says truck travel to the Port of Melbourne from Princes Freeway will be at least 12 minutes faster in peak times — leading to cost and time savings for transport companies.

The government says 9000 trucks a day will be removed from local roads and 8000 from the West Gate Bridge with the tunnel and the bans.

Roads Minister Luke Donnellan promised cars would not be tolled on the upgraded West Gate Freeway or there would be any charges on the existing road network.

“We’re building a dedicated route to the Port of Melbourne to relieve the pressure on the West Gate Bridge and the EES shows that the tunnel will do just that,” Mr Donnellan said.

The EES says there would be “innovative tolling solutions” for night time discounts, trip caps for use of the tunnel and the CityLink and discounts for multiple trips to and from the port.

More freight would be encouraged to be moved at night with discounts for truckers using the toll routes after sundown.

The report says final toll price and structure, are still subject to negotiations through the Department of Treasury and Finance’s Market Led Proposal process.

He said there would be more trucks using the West Gate now than when the project was built.

“It shows that for spending billions of dollars, and years and years of extra tolls, Victorians will not really get any traffic relief at all,” Mr O’Brien said.

“It’s only going to take about 3 per cent of trucks off the West Gate, but 100 per cent of CityLink users have to pay extra tolls for years and years. This just doesn’t stack up.